The Karlštejn Castle is hidden among rolling green hills near Prague. Charles IV, Holy Roman Emperor, founded it in the 14th century at a time when the Czech Kingdom was undergoing great societal development. Despite its Neo-Gothic reconstruction, the castle remains a majestic witness to its times. As is apparent from the name of this castle, ‘Karlstein’ (Charles’ Stone), this was not going to be just an ordinary castle. Its three-level construction in accord with the Christian gnostic teaching is an expression of the medieval understanding of the Universe. For the most part, the castle’s very precious frescoes were preserved. Charles IV therefore realized his audacious dream. The Chapel of the Holy Cross was built as a safe location for the regalia of the Kingdom of Bohemia and the Holy Roman Empire, as well as for the holy relics that Charles eagerly collected. But it was also the place where the members of his secret knightly Order of the Golden Buckle held their meetings. The Holy Cross chapel in the upper part of the keep is an exceptionally beautiful example of Medieval art – paintings representing ‘the army or holy patrons’, created by Charles’ court painter Theodoric of Prague, continue to astonish viewers with their originality, even six centuries later. The semi-precious stones and gold used for wall decorations in this exceptional space contribute to Karlštejn’s powerful impression. 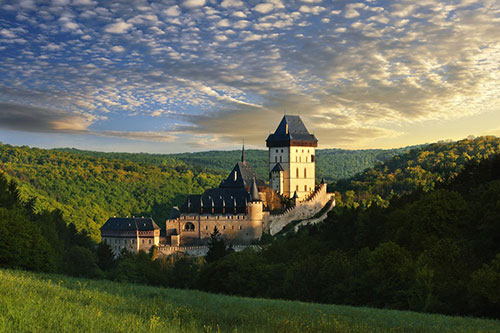 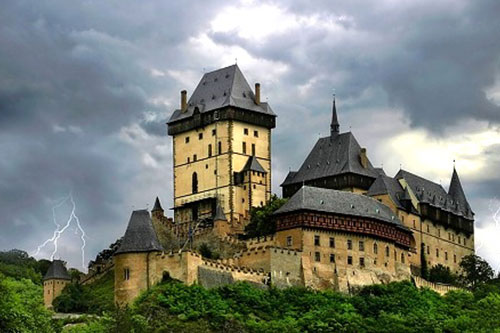 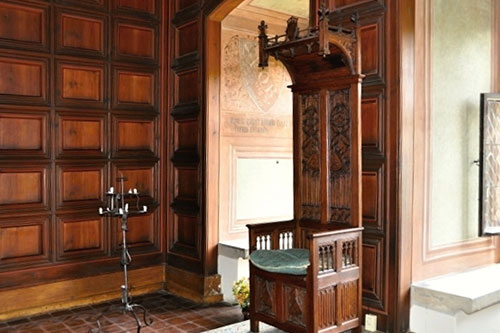 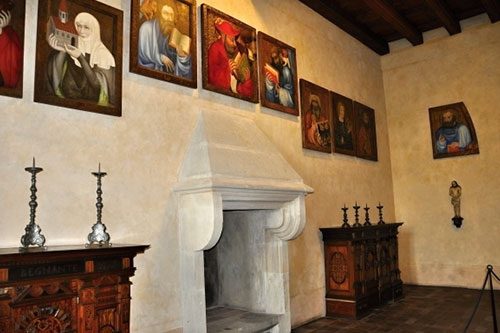 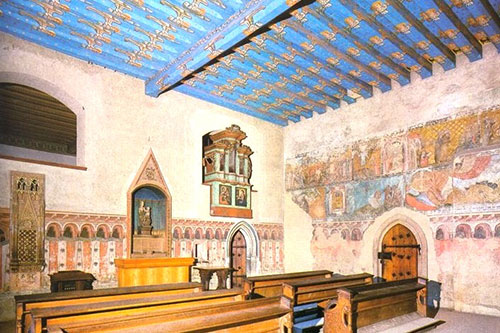 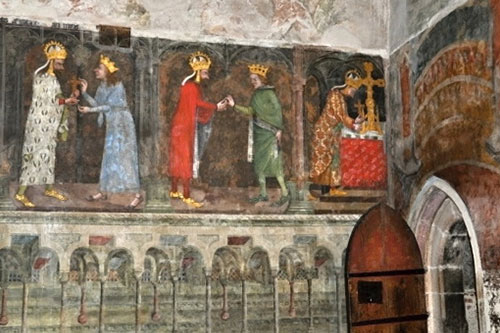 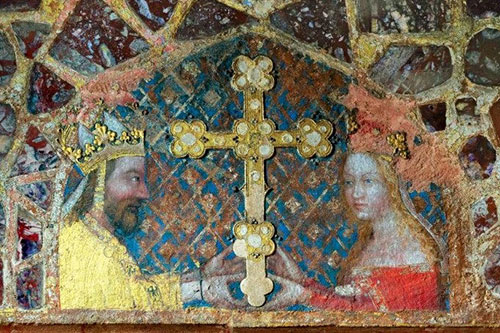 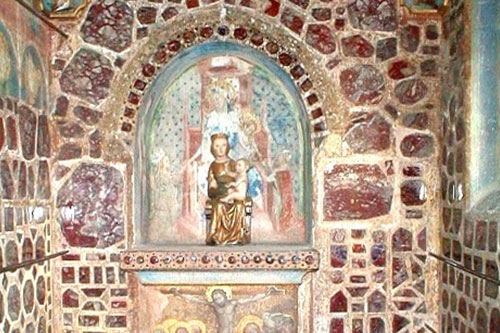 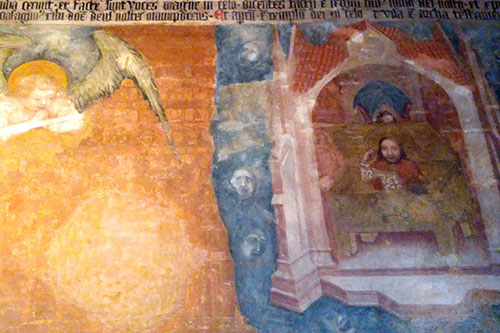 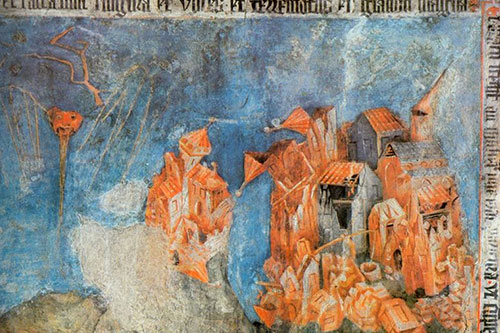 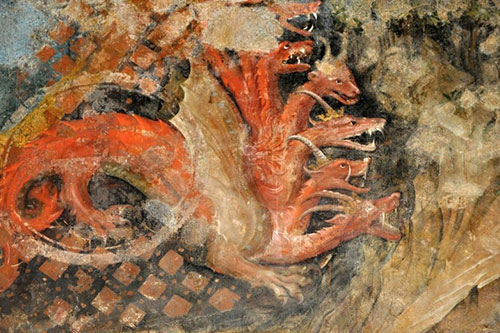 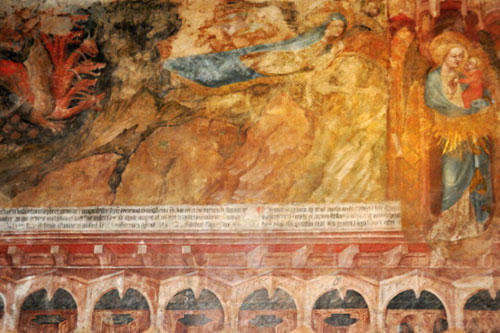 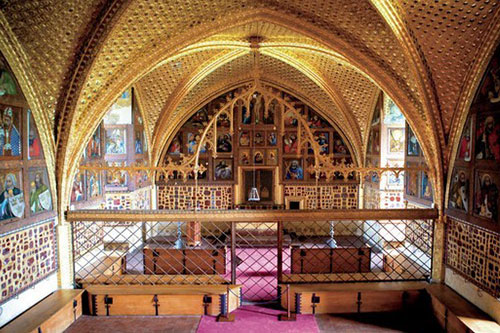 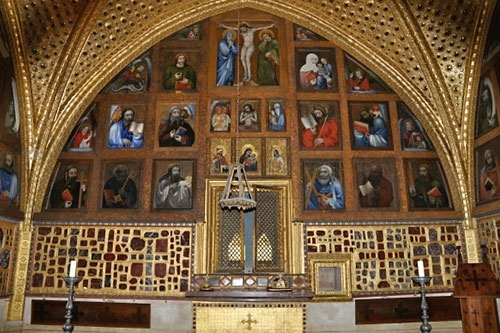 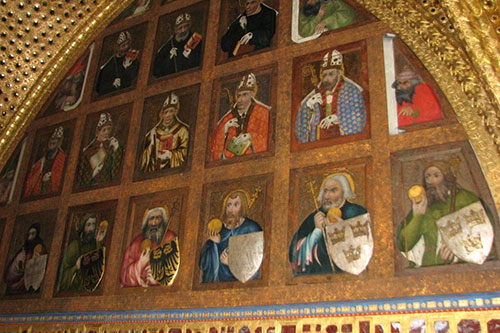 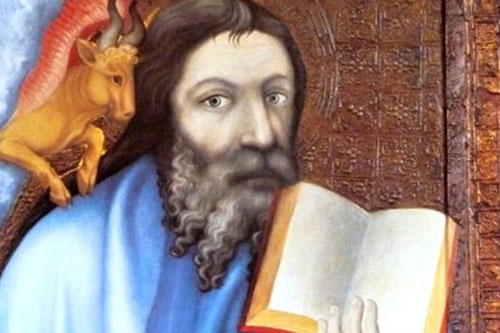 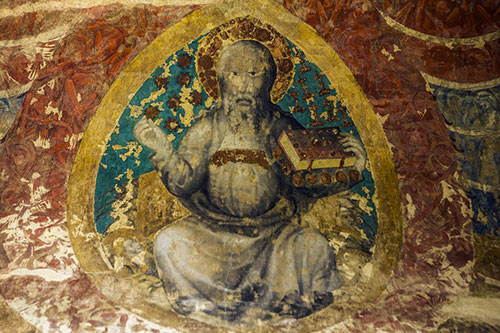 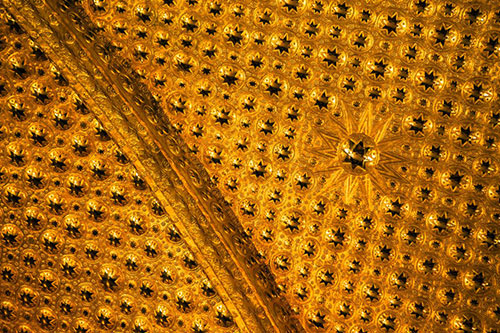 Duration: 60 minutes. The typical tour offered by most travel agencies, covers the historic interiors of the Imperial Palace and St. Mary’s Tower, all equipped with furniture and artifacts from the 14th through the 19th century. For example, we will see the Throne Room, as well as the Imperial bedroom of King Charles IV. Many valuable artworks are on display as we walk through the chambers of this majestic Medieval castle. The tour is available May through November daily, except Mondays and on certain off-season weekends. During July and August, Mondays are included.

Duration: 90 minutes. The tour covers the most impressive sacred interiors of this majestic Medieval castle - St. Mary’s Tower and the Keep. These spaces with their exceptionally valuable artistic decoration from the 14th century were inspired by the Revelation of St. John and contain depictions of the Apocalypse, as well as the description of the ideal city – heavenly Jerusalem. Also on view are allegories from the lives of the two most venerated patrons of the Czech lands – St. Wenceslas and his grandmother, St. Ludmila.

The pinnacle of the tour is our visit to the Holy Cross Chapel. This is an exceptional tour that is always organized in small groups and based on prior reservation. You will enter the sacred spaces formerly accessible only to the Emperor and Archbishop. The collection of Medieval panel-paintings that is preserved here is the largest in the world, as well as the truly breath-taking chapel walls, inlaid with gold and semi-precious stones. The tour is available March through November, daily except Mondays. In July and August Mondays are included.